To the casual observer, it may seem like all signs are pointing to “peak venture.” The news is full of stories exposing the excesses of the industry and predicting its imminent collapse. And to be fair, there’s plenty for people to worry about: fundraising for venture is at an all-time high; prices by round are setting records; unprofitable IPOs are back in vogue with public investors willing to bet big on businesses burning through cash; and possibly the most alarming indicator of all, Patagonia is so concerned by its association with the image of VCs that it announced it will no longer allow financial firms to add their logos to their signature fleece vests. An entire generation of aspiring venture capitalists cut off from the one piece of clothing that expresses their love for both casual outdoor adventures and MOIC.

One of the problems with the “peak venture” view is that these same market factors have been in effect for years, and yet the market has continued to take off, seemingly unfazed. Venture and growth equity have consistently outperformed the broader private markets, the developed market buyouts and the public benchmarks over the last one-, five- and ten-year periods. 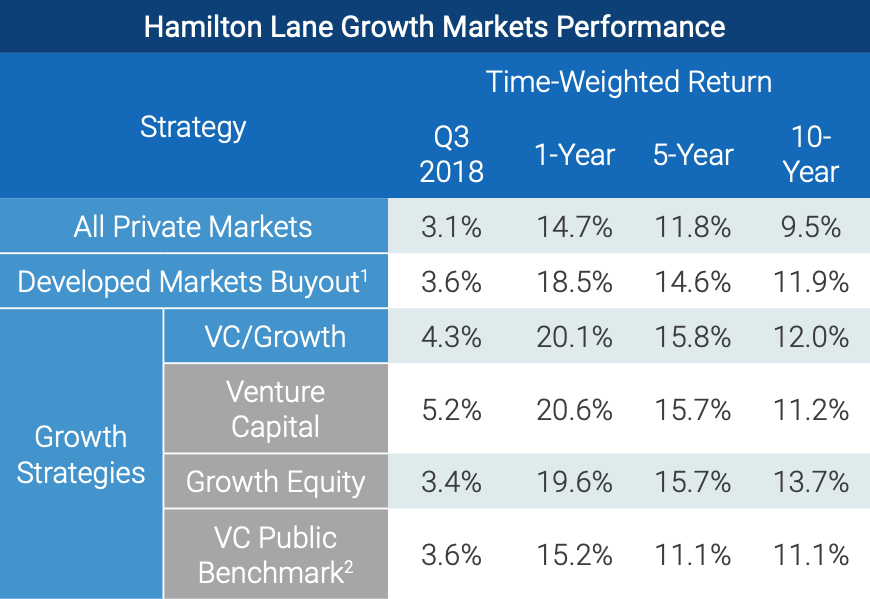 And, in that same period, HBO has filmed five seasons of Silicon Valley – so shouldn’t the euphoria have subsided by now? What’s fueling this market beyond Soylent and raw ambition? To answer that, we zipped up our vests, laced up our Allbirds and dove into our data to better understand what’s driving this growth and how sustainable it could be.

Conventional wisdom developed after the last tech crash dictated that the venture industry is not scalable. Any increase in fundraising simply dilutes returns, as it doesn’t produce more winners and wastes money on the eventual losers. It seemed like every venture capital firm in the early 2000s downsized its fund and promised never again to repeat the sin of raising too much capital. But today, venture firms are back at it, raising multi-billion dollar funds and driving global venture fundraising to even greater heights. Are we in danger of repeating the same mistakes? Is this scooter-riding crop of fresh-faced VCs too petulant to learn from their elders?

Or, are there perhaps some fundamental differences in the market today?

When we compare today’s global VC market, a couple key differences stand out:

Emergence of the late-stage market

In 1997, Amazon went public with quarterly revenue of $17 million and a total market value of $438 million.1 The company was three years old. Google, which had a near-record $23 billion valuation at the time of its IPO in 2004, was the ripe old age of six.2 In the past, companies tended to go public at much earlier points in their development, transferring from the private to the public markets to fuel some of the most rapid years of their development. The market looks very different today, with companies choosing the opposite path and instead relying on private markets for their growth. Unicorns, which are private companies valued over $1 billion, were virtually non-existent as recently as nine years ago, but today there are 342 companies considered to be unicorns, representing $1.2 trillion of market cap.3

In 2000, $14 billion was raised to invest in growth equity opportunities to support the expansion of established, private tech companies, which represented 9% of all venture and growth capital raised that year. Compare that to 2018, when $69.4 billion was raised in the same category representing 40% of all venture and growth capital raised. The jury may be out on how those strategies will perform over time, but the need for more private capital to service this new segment is evident.

Venture has become a global sport

One of the themes we’ve heard most consistently from venture capitalists over time is the need to take a global view on the technology markets due to the reduction of geographic barriers. Traditional epicenters like Silicon Valley, which enjoyed massive structural advantages, have remained strong, but other geographies that have invested heavily in technology, received government support and benefited from the global dispersion of talent have grown faster. Using the number of unicorns as a metric, fewer than half of the global unicorns are now headquartered in the United States. With funds finding opportunities and generating returns all over the world, there is a clear need for additional capital to seek those investments.

It’s interesting that in venture, an industry that prides itself on being grounded in data and analysis, the press uses valuation metrics based almost exclusively on the series of financing round raised – often with little to no consideration given to the amount of capital raised beforehand, the age of the business, the underlying traction, the potential market opportunity, the quality of the business model, or any other metric that could provide important context to the price paid.

If every business grew on the same path and created the same ultimate value, a look at the charts above would indicate an issue. But companies aren’t the same. In fact, by definition venture companies are disruptive and innovative, which makes them difficult to compare side by side.

So why are companies today on average more valuable than companies in prior periods?

More funding before reaching series A

With an increase in availability of capital from friends, family, angels and seed investors, companies have the ability to, and often do, raise significantly more capital before tapping the institutional venture market. As a result, by the time they receive a series A, they’re more mature and have less risk associated with them.

During the dotcom bubble, one of the first steps taken by a new technology company was often to buy millions of dollars of servers and equipment to prepare for growth. Today, with third-party providers available to handle everything from IT infrastructure to HR, emerging companies can focus on higher-value items from the start – creating product-market fit and demonstrating traction. With those two in hand, they can reach higher valuations more quickly.

While companies growing quickly in the venture market are still burning cash, not all business models are the same. Take, for example, a comparison between the 1999 IPO of pets.com, essentially the poster child of late 90s venture excesses, and the 2012 IPO of Workday. Both companies lost tens of millions of dollars in their first year as public companies – but Workday, which offers financial and human capital management SaaS solutions, generated $73 million of highly recurring revenue, which meant that the company could have almost managed to break-even if it chose to stop spending on sales and marketing. Pets.com, which sold pet supplies directly to consumers online, spent $17 million on marketing to generate just $8.8 million of non-recurring revenue that fell away when it shut down its marketing efforts.

The value of a new business is based on the ultimate exit value discounted by the probability of achieving that exit and the time it will take to do it. Exits have been growing larger as the overall technology market has expanded, creating bigger addressable markets and the potential for bigger businesses. The skeptics, though, refuse to believe that. They will tell you that regardless of size and value, the public markets are overheated and will come back down to Earth, toppling the whole system, because even if history doesn’t repeat itself, it certainly rhymes. Take a look at the chart below showing median IPO valuations relative to median revenue over the years and decide for yourself which part you expect to rhyme:

To be clear, venture and growth markets have plenty of risks, but those risks are different from the ones faced 20 years ago. Blanket statements or unsubstantiated predictions that call for the past repeating itself miss the big picture and fail to recognize the way the market has evolved over time. With the development of new business models, the expansion of addressable markets and the desire for companies to stay private for longer, the venture industry is creating massive value for its investors and driving global growth, often at the expense of established industries. Playing it safe and choosing to wait out “peak venture” could turn out to be the riskiest move of all.

All Private Markets
Hamilton Lane’s definition of “All Private Markets” includes all private commingled funds excluding fund-of-funds, and secondary fund-of-funds.
Russell 2000 Index
An index composed of approximately 2,000 smallest-cap American companies in the Russell 3000 Index, which is made up of 3,000 of the largest U.S. stocks. It is a market-cap weighted index.

Keith Brittain dives into the evolution of the secondaries market, the growing opportunity and popularity, and how he sees things shaping up in 2023.

Listen to the Podcast
insight

A new year and a new zodiac sign. If the tiger's job last year was to hunt, kill and devour the public markets, then mission accomplished. Let's now hope that this year's rabbit will stay alert and outrun anything that might try and tackle the markets.