What is it about the market and regulatory structure in the U.S. that makes infrastructure spending ostensibly more difficult than in other global economies?

To start, the Federalist approach of the United States results, by design, in a decentralized collection of state governments with weaker federal authority than other sovereign states. The federal government’s largest dedicated infrastructure spending vehicle is the Highway Trust Fund (HTF), which was established in 1956 to fund the nation’s interstate highway system. The HTF is funded through a federal fuel tax of 18.4 cents per gallon on gasoline and 24.4 cents per gallon on fuel. In a way, this is one of the early examples of a federal use tax applied to infrastructure assets. Raising taxes to fund further infrastructure buildout or improvement has never been a popular option.  As a result, the fuel taxes that support the HTF have not changed in more than 20 years and some analysts believe that the HTF could be insolvent as early as 2022.

Although the HTF still provides a significant funding source, state and local governments supply  approximately 75% of the funding for most U.S. infrastructure spending.

State governments accomplish this primarily through the issuance of tax-advantaged municipal bonds or through budget reconciliation measures. As shown, state and local government spending on infrastructure has also flatlined in recent years.

With public sources of infrastructure capital seemingly tapped, this should create a healthy environment for private capital to help fill the gap. The typical models for public-private partnerships (PPPs) come along with a healthy number of commercial, regulatory and political risks. The table below summarizes some of the typical transaction arrangements we see within PPPs. 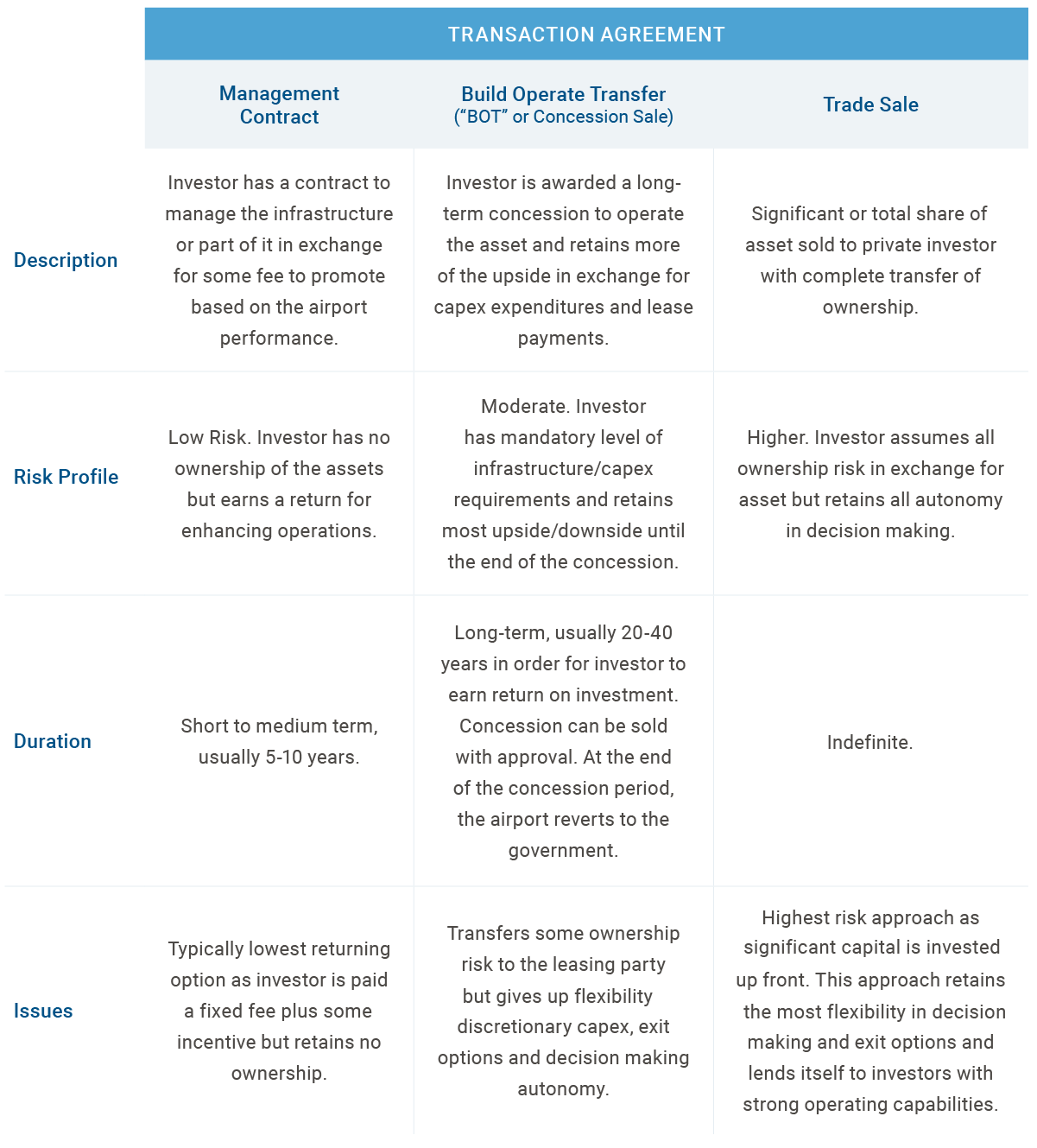 These transaction arrangements seem straightforward enough: Different parties assume different risks in exchange for different participation rights in the economics of the project. So, there are probably lots of PPP-structured projects all over the U.S., right? Wrong. In fact, there’s a real disconnect between the need for capital and the capital that actually gets deployed in these projects.  Here are a few reasons why:

As you can see, these hurdles are real and they are difficult to overcome. That said, we are seeing some PPPs get done, but they are generally limited to semi-autonomous entities like universities or port authorities that have greater latitude to structure private capital investments without the same hurdles faced by state or local municipal governments.

In contrast to the U.S. market, Europe and other parts of the world have successfully employed models that more effectively integrate private capital asset ownership with public funding or regulatory oversight.

The Regulated Asset Base (“RAB”) model is a system of investment incentives and price control mainly used in Europe to support infrastructure needs. This model essentially grants an asset owner/developer with a monopoly position to provide a service, while price controls and efficiency targets are maintained by the regulator. The regulator determines the types of capex that can be included in the asset base, along with a rate of return that can be earned on that asset base by the private owner. The rate of return, however, is often based on the regulator’s determination of efficient service delivery. This model has incentivized the development of large-scale, complex projects and encouraged their efficient operation by private owners. While regulated utilities in the U.S. employ a similar model for electricity, other countries have utilized the RAB model to both modernize and develop a broader spectrum of essential infrastructure, including water distribution, gas networks, electricity generation, airports and road and rail transport.

In the renewables sector, two common public-private funding mechanisms employed globally are Contracts-for-Difference (“CFD”) and Feed-in-Tariffs (“FIT”). CFDs are long-term (e.g., 15-year) contracts between the energy generator and the government, whereby a ‘strike price’ is set via a reverse auction during which generators bid to sell power. The payment profile is more bilateral than Feed-in-Tariffs by introducing a clawback mechanism that results in a payment to the government when the strike price is below the market price. This seeks to make pricing fairer to the electricity consumer.

Feed-in-Tariffs are a form of revenue subsidy whereby a government entity agrees to underwrite a floor price, typically above market levels, over a long-term contract of 15-20 years. By underwriting electricity tariffs at above market levels, the government can encourage the development of renewable energy that was early in the maturation lifecycle when build and production costs were high. However, the dramatic decline in production costs (e.g., the levelized cost of solar PV has declined by 90% since 2009) has led to several governments (see: Germany, Spain) winding down their existing FIT regimes while others have taken more draconian measures (see: France) to cut tariffs on contracts where the government now feels that the rates were set too high.

Overall, FIT deployment is broadly in decline across Europe; however, it continues to form an important element of renewable energy roll-out in developed Asian countries, such as Japan, and other markets where renewable generation is much less mature, and governments are trying to encourage private investors to add incremental capacity. Where do we go from here? In Part III of this series, we’ll break down the $1 trillion plan proposed by the Biden administration in the U.S., an ambitious and unprecedented spending package which seeks to address some of these hurdles.

The Strategic Importance of Infrastructure in the U.S. and the Shifting Role of Public and Private Capital