Acceleration of Trends: SPACs, GP-Leds, and the Case of the Longer Hold

— “All We Need is Just a Little Patience,” Guns ‘N Roses

Loyal readers of our market commentary (we like to think such a group exists) can sing along to this tune, as it is one with which they will be quite familiar. The asset class is taking longer to monetize investments. The chart below has made regular appearances in our Market Overview for the past several years, often with the acknowledgement that it is one of the most important.

% of Deal Count by Year of Exit 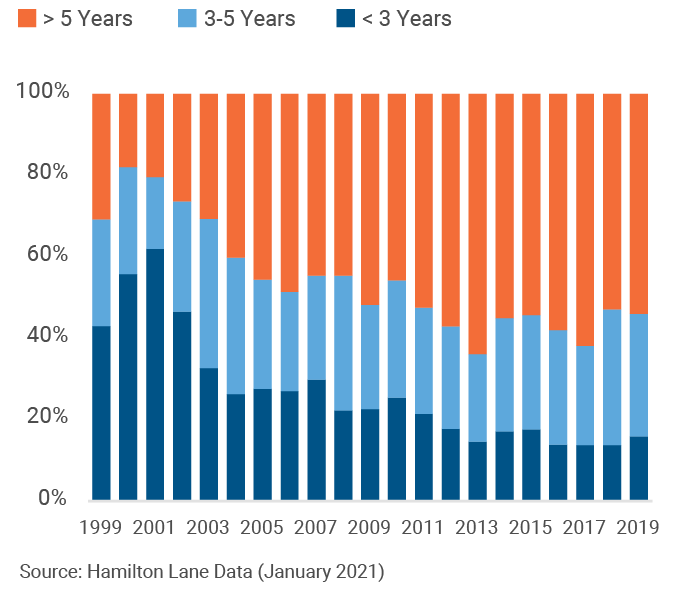 Holding periods for buyout deals have elongated. In the early 2000s, almost half of all deals were exited in the first three years. Today, that figure stands at less than 20%. This is a remarkable change, and one that has yet to make its way to public perception or media depiction of the asset class. How often have you read a characterization of buyouts that sounds something like this: “…buying assets cheap, using leverage, and quickly flipping them for a gain”? Well, buyouts do generally use leverage, so at least one of those points is still accurate.

Looking at the data differently, the same trend emerges. The chart below shows the median holding period for exited buyout deals. Gone are the days of average hold periods of three years. Today, holds are 5-6 years. To borrow a line from our 2021 Market Overview, the business of buying and selling companies is now the business of buying and operating/growing/managing companies for several years before exploring an exit.

# of Years of Exit 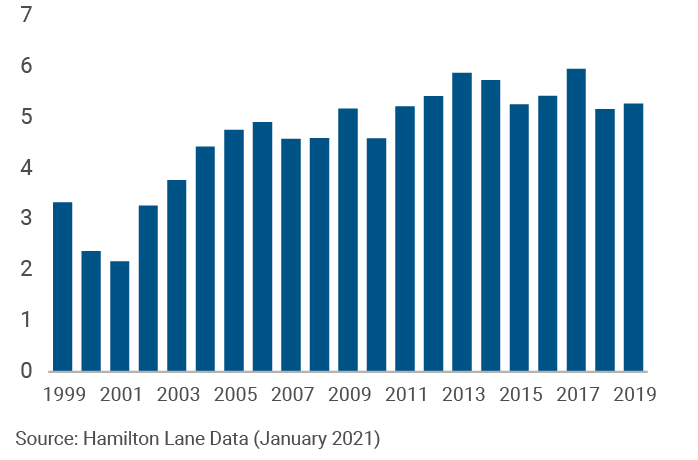 I know what you are thinking. In a piece about accelerating trends, I’m highlighting changes that have been in play for over two decades – how insightful. While the private markets certainly operate at a different pace than the public markets (which, of late, seem to be measured by the attention span of millennials using trading apps), I promise I’m not that out of touch. My point is this: Longer holding periods pose challenges for LPs. Although LPs come in all shapes and sizes, and have individual preferences, there are two things that nearly all LPs love –high IRRs and cash back. Both of these are at odds with longer hold periods. If you don’t believe me, pull out your TI-83 calculator, and do the math to compound a 30% return for 6 years; it’s hard to make that kind of money multiple on deals.

This is where the immovable object meets the unstoppable force: LPs’ desire for IRR and liquidity, and GPs’ desire to hold on to assets longer in order to implement business improvements and to capture the full economic benefits of doing so.

Enter SPACs. And GP-led secondaries. There are a number of parallels between these two phenomena, with GP-led secondaries effectively serving as the private market equivalent of SPACs. Both were barely discussed five years ago; comprised small parts of the market just two years ago; and roared into the conversation in 2020. Both provide exit opportunities for existing investors, while often leaving the GP in control and with continuing economics and upside capture in the company. AND, both SPACs and GP-led secondaries had investors racing to get as much of them as possible in 2020.

To say that these markets accelerated in 2020 would be an understatement. Looking at the chart below, we see that after a muted first half of the year, GP-led activity came back in full force in the second half of 2020, representing nearly 60% of total secondary market activity. 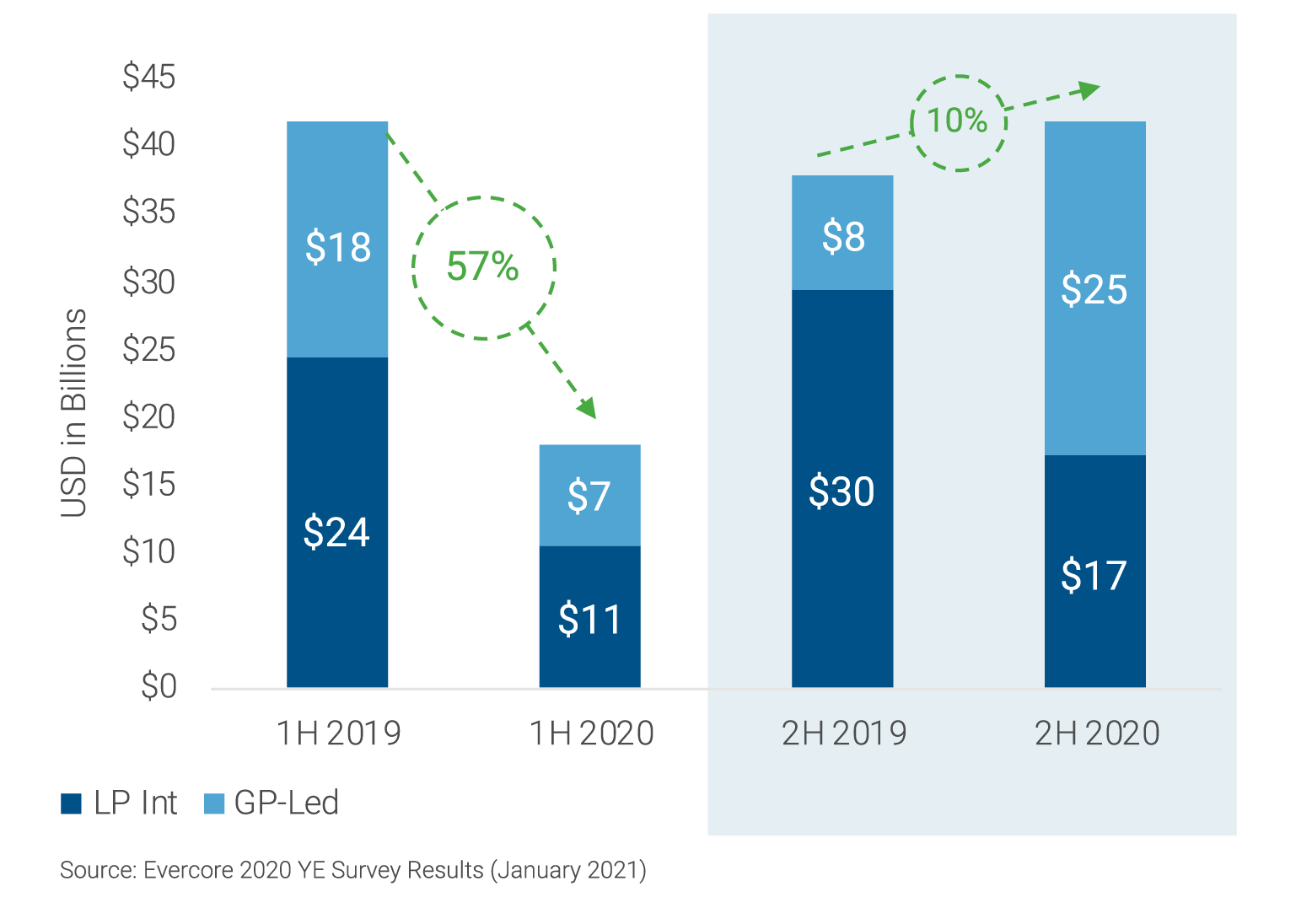 The rapid growth of the SPAC market in 2020 is well-documented, but we thought we’d add some context as to how that translates into potential impacts on the private markets. The following chart illustrates that the dry powder in SPACs issued in 2020 represents about half of all North American venture and growth distributions.To the extent that the SPAC dry powder is targeting companies owned by VC and growth investors, those investors could see a significant increase in distributions 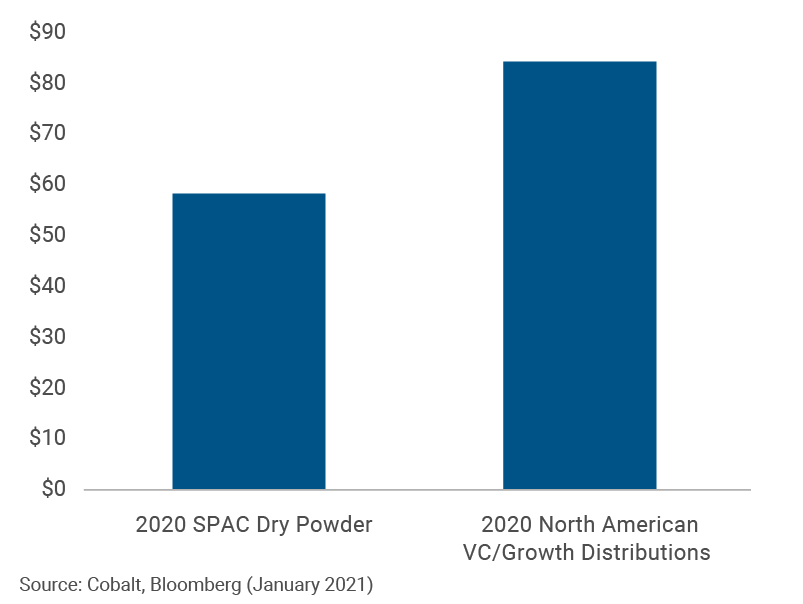 As of this writing, the SPAC market is a bit wobbly, as investors sort through and digest the large volumes. The GP-led secondary market is in a not dissimilar place, with GPs, brokers and investors prioritizing which deals get done, with a huge backlog behind them. Gone are the days when the ‘quick flip’ was an apt characterization of general buyout activity. Longer hold periods are here to stay. Against that market dynamic, our guess is that both SPACs and GP-led secondaries will continue to have investors talking throughout 2021 and beyond.

Weekly Research Briefing: "Houston, we have a problem"

I didn't plan on writing a WRB this weekend due to some travel and family obligations but given the market's move last week, I felt it was important to convey some thoughts.

Benchmarking in the Private Markets: The Four Minute Mile

In investment management, benchmarking is a critical part of assessing an investment portfolio.