Where Are We Now?

You’ve just tuned in to CNN or BBC or Newsmax (if that last one, from your Doomsday Bunker) and you hear that vaccinations are too slow, supplies are way behind, the virus is raging everywhere, mutations are occurring every minute.

OK, let me get the punch lines out first: It is remarkable how quickly cases and deaths are declining with just a small number of people vaccinated globally. It is also remarkable how quickly, particularly in the EU and the U.S., massive additional amounts of vaccines will be delivered and people vaccinated, arguing for significant progress in those areas reducing the virus’ impact. There, that needed to be said. (Here’s one example of what we’ll be seeing: Pfizer’s vaccine manufacturing facility in Kalamazoo, Michigan expects that it will shortly have the production cycle for the vaccine down to 60 days from the 110 it took when they first started making the vaccine.) But we don’t need to wait for good news. It’s happening now. Let’s look at cases.

Hmmm, that doesn’t look like what I’m hearing… Cases are down everywhere. I picked a somewhat random series of countries, but the decline is apparent in all of them, although less so in Brazil and Italy. Lockdowns are a factor and many of these countries have restrictions in place that have reduced cases. However, recall that those same restrictions weren’t doing much a month ago and it is also important to note that the U.S. has changed very few restrictions. In fact, many places like California have eased restrictions. Yet, the U.S. is seeing a precipitous decline in cases. I will argue that even the moderate start of vaccinations has had a much more pronounced impact than we imagined. Here’s a chart of those same countries with their vaccination pace. I don’t think it is coincidental that the UK and the U.S., with the highest vaccination rate among these countries, are also ones with such steep case declines. I have more good news when we look at hospitalizations in many of those same countries (not all countries have that data).

Number of COVID-19 Patients in Hospital3 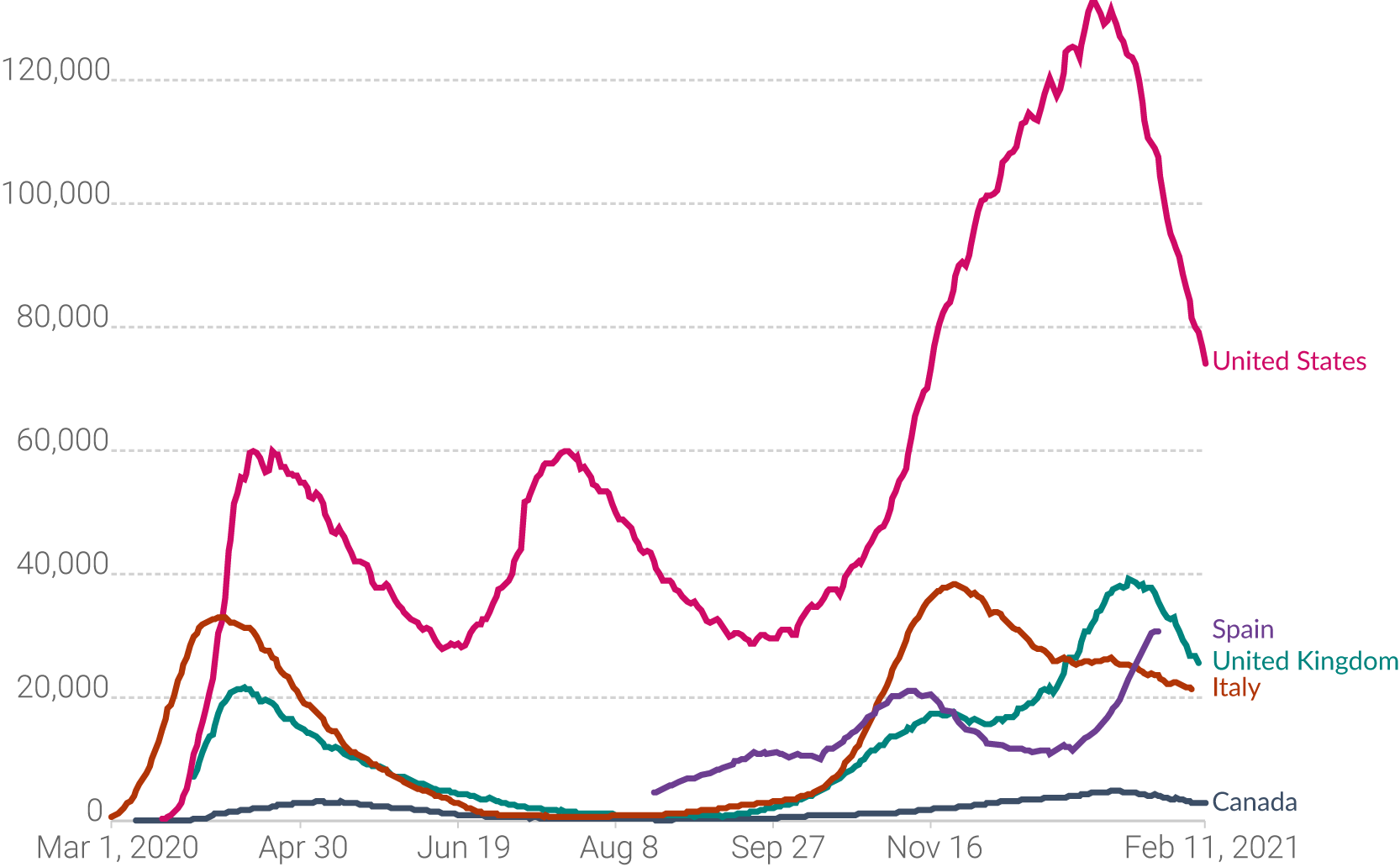 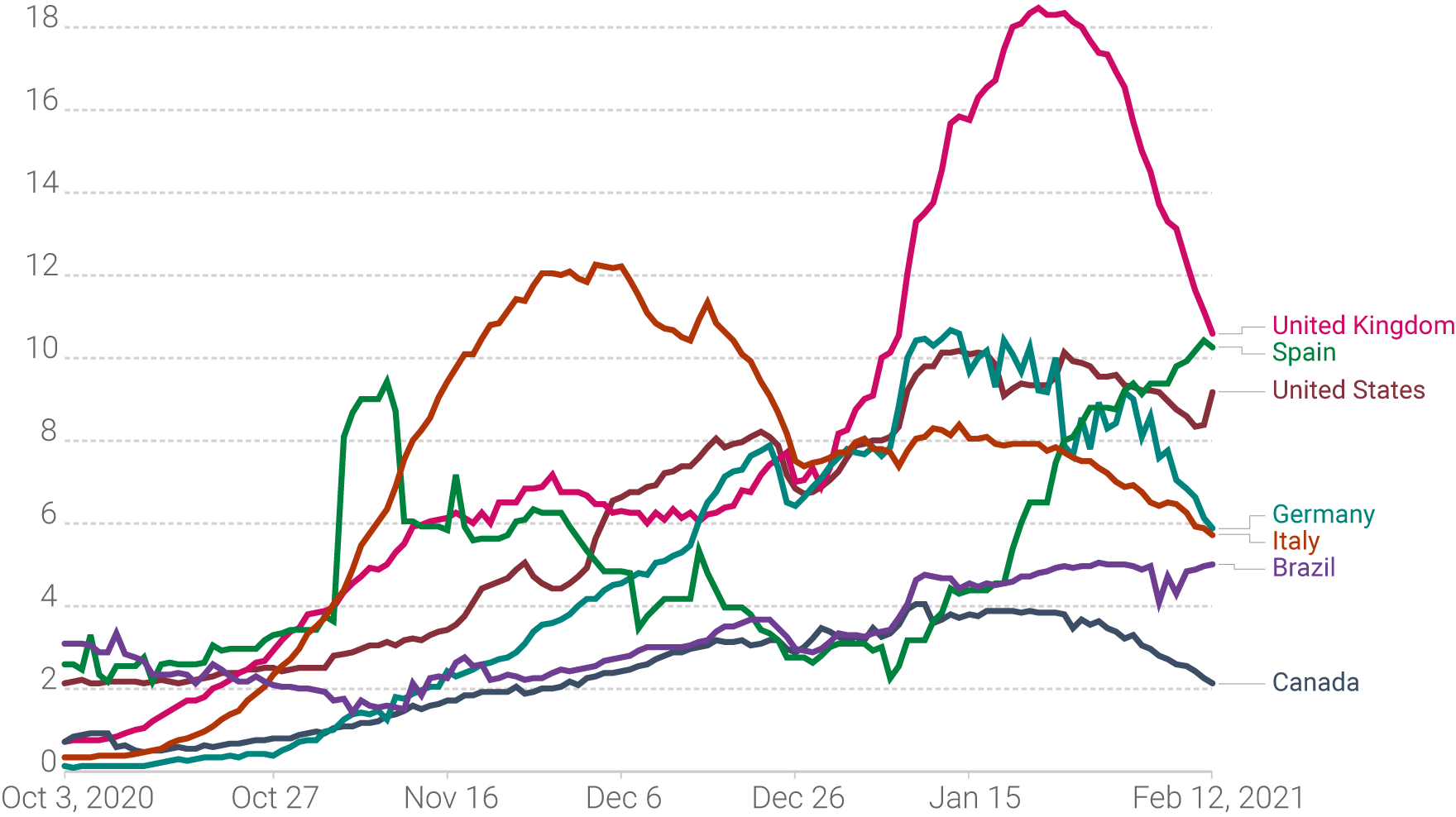 The trajectory has shifted in most countries, although Spain remains an outlier in the data. Other countries are trending down. While that in itself is good news, it is particularly encouraging because we should be seeing a large spike in deaths to reflect the large spike in cases in all these countries a few weeks ago. It hasn’t happened.

Where does that leave us? In a good place. The trend here is clearly your friend and the trend is declining cases, hospitalizations and deaths. It makes sense, doesn’t it? Haven’t we seen, from the start of this pandemic, that COVID-19 was a demographic-seeking missile, aimed at older populations? As you vaccinate those populations first, you will impact the part of the population that is most vulnerable to becoming infected, being hospitalized and dying. Most countries, even those with slow vaccination levels like Germany, have substantially vaccinated most of their nursing home residents. That causes a significant difference in the number of cases, particularly serious ones, and deaths. Here we are, barely two months from the moment when the UK vaccinated the first person, and we are seeing evidence that we are changing the narrative on the pandemic. We are still far from the end and this may prove to be illusory and those experts telling us that a hurricane is coming, that the virus will mutate its way to another wave, or whatever calamity is next, may prove to be right. But I’ll mention that they haven’t been all that correct for the last year and while caution is important and warranted, so is a look at actual data and a moment of optimism.

There’s been no shortage during this pandemic of concerns that vaccination would turn into a food fight among countries for access.

And the first shall be last

In 2019, with a fair amount of press, Johns Hopkins prepared a global health security index. It measured, on a variety of scales, a country’s preparedness to deal with a global pandemic. In the chart below, countries were ranked based on their GHS score and their deaths per million inhabitants to COVID-19. The U.S., which was ranked first in the GHS index, was ranked 145th by deaths, with only eight countries worse. The UK, ranked second in the GHS index, was 149th. Why are so many rich countries, which should have, in theory, had the fewest deaths, the ones that have experienced such poor health outcomes? There are a variety of reasons that will be studied for years to come. One has more to do with the virus, and that is those countries having the higher proportion of older people relative to poorer countries. COVID-19 struck this population disproportionately and the GHS Index couldn’t account for the demographic bias COVID-19 exhibited. An equally important reason is a failure of leadership in many of those countries with high death rates. The pandemic is not over and the death rates may change as vaccination first spreads through richer countries, but the chart is striking in the disparity between expected and actual outcome.

Keith Olberman had a show on MSNBC on which, each evening, he would call out “the worst person in the world.” This pandemic has featured great acts of kindness and heroism. But there have been some acts that fall well short of that. I will start a new feature that I hope to use sparingly for “The Pandemic’s Worst. Person. Ever.” The inaugural award goes to a Canadian couple. Casino executive Rodney Baker and his actress wife Ekaterina Baker chartered a plane from their home in Vancouver to take them to Beaver Creek, a community of 100 in Canada’s Yukon territory (it’s almost 3,000 kilometers by car so this was a real distance away), where a mobile team was administering the Moderna vaccine to locals, including elderly members of the White River First Nation. This was part of the Canadian government’s effort to ensure that indigenous groups and those most vulnerable received the vaccine. The Bakers arrived at the mobile clinic and posed as local motel employees. They received the vaccine and immediately went back to the airport to head home. Someone reported them and they were detained and now face fines and an outraged public.

There's a certain slant of light,
On winter afternoons,
That oppresses, like the weight
Of cathedral tunes.

For those of us that live in countries where COVID, or fear of COVID, runs pretty rampant, this is all getting really old, isn’t it? Here we are, a year into this pandemic, and the vaccines are frustratingly out of reach. Yes, some are getting vaccinated, but not as many as we want, and it sounds like supplies are going to take a while to make vaccines as plentiful as aspirin. We read that a variety of countries, Australia, New Zealand, the UK, are saying people might not travel in and out of those countries for the rest of 2021. That doesn’t sound like progress. Restaurants, bars, sporting events, weddings, name your social event and it’s just not looking like we’re bringing back old times soon enough for most of us. The virus is still roaming relatively free and everything seems so damn far away. Sure, we can get together with other people in our bubble, whether people that are safe or people that are vaccinated or people that have given up worrying about it. But that’s a different thing from just not worrying about it, isn’t it? You’re always aware, there’s always a layer of worry, of caution, of concern. There’s always a limit on what you want to do, want to do NOW.

I read something an athlete said, I believe it was Serena Williams, about a key to her success not tied to skill or luck or talent. She said everyone at her level had those qualities in enough doses to be the best. The difference came down to pain management. It was a matter of who can deal with the pain that comes with pushing forward and dealing with adversity at those moments when the match or the contest has reached what feels like your limit or threshold. That, for her, separated the ultimate winners. This was not the pain of injuries that keeps you from competing, but the pain of fatigue, of hitting the wall, of endurance, of the body and mind saying, “I can’t take anymore.” Some deal with it by ignoring the pain, some by embracing the pain, some by using the pain as motivation. Some give in to the pain or are unable to overcome it. We watch this when we all tune in to the Olympics, we see it at most sporting events. You see it on the athletes’ faces. It is part of sport.

It is also part of life.

Physical pain is easy to identify and we choose to handle it in our own ways. Now, many of us feel as though we are reaching a mental pain point in terms of enduring the pandemic. OK, we have dealt with this for a long time, remarkably well if we are willing to congratulate ourselves. But this is the time for which athletes train. This is the point at which you think you can’t go farther, that it has to end, that you’ll make it end. But I have a piece of advice for you. Surprise yourself. Push through this part of the pandemic’s cycle and push through to the end, when we are vaccinated and we slowly, like someone blinking out of a slumber, return to some old patterns, some old habits. When we randomly sit down with someone and share a cup of coffee, a laugh, a conversation. You will get to that other side and you will be impressed with yourself, with those around you. That’s how athletes become great. They know there are moments when it seems like there is nothing left to give and they find more. You’ll find more, we’ll find more. It’s not that much longer and we’ve already learned so much about what matters to us and what we are capable of doing when things are challenging.

CEO Mario Giannini shares information on rising COVID-19 cases in Europe and South America, as well as an interesting perspective on inflation.

COVID-19 & Market Update: Blast out of your mental sand trap

In his latest COVID-19 & Market Update, CEO Mario Giannini shares his predictions for all things vaccines, inflation and important trends in the private markets over the next few years.

In his latest COVID-19 & Market Update, CEO Mario Giannini shares his thoughts on how the vaccination process is being handled worldwide and outlines the latest ripple effects across the public and private markets.